Eurema hecabe is found across the entire African continent, throughout most of Asia south of the Himalayas, on most of the islands of the south Pacific, and across much of Australia. They have broad habitat preferences, ranging from agricultural fields, the open fringes of vegetated areas, shrubland to well wooded areas. Like other Grass Yellows, it is usually skittish and hard to photograph.

Underneath, there are typically two cell spots on the forewing - a characteristic that is mainly used to identify the lookalike species in the genus. However, some specimens could exhibit variations in which only one or no cell spots are present, as can be seen in the picture below. 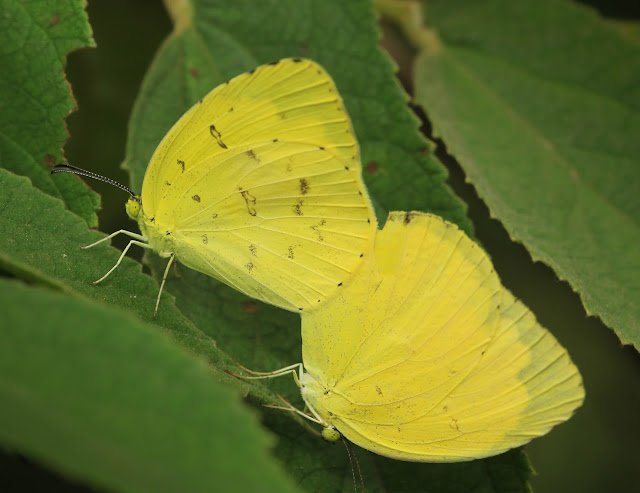 Mating pair of Eurema hecabe
Note that the specimen on the left has two cell spots on the underside of the forewings, whereas the one on the right has just a minute spot. Note also the hindwing distal margin "angulated" (i.e. not evenly rounded) at space 3
Posted by Sébastien Delonglée at 19:22