Cuc Phuong at the rainy season


Well, another trip to Cuc Phuong has yielded yet another species for my personal records. It had been raining all week and I was desperate for it to stop. The weather forecast was predicting rain, I decided to go anyway.
It was a rainy day, so most of butterflies were all hidden in the vegetation. Quickly, I have realised that it would be a challenging - and very probably not productive - trip. Even the most common and conspicuous species (i.e. Appias spp., Papilio spp., Euploea spp., Tirumala spp. Ideopsis spp....) were small in number.

I decided to focuse on the forest edge (roadside before Mac lake, botanical gardens), instead of the forest interior - too gloomy for photo. The flowering plants (mainly Bidens) here attracted a good diversity of species but few individuals, mostly common species but also some unexpected goodies such as the Lycaenids Suasa lisides, Sinthusa chandrana, Hypolycaena othona, Rapala cf. suffusa - all new for me.

I recorded around 80 species, so about 75% of the number of species I saw 2 months ago during the same period of time (1,5 day), among them five news species for me (and another which I don't know what it is). It seems very likely that heavy rains over the past few weeks* increase the mortality of caterpillar, pupae and adults, hence the low abundance of butterflies. The cooler and wetter weather affect also the detectability of many species. But it's very likely that the abundance and species richness can also fluctuated strongly between days, i.e. between overcast and sunny days.

*from the Meterological Station data, it was reported that Northern Vietnam received the last 2 months an above average rainfall.

With this trip, I finally get to that magical 300 species barrier, i.e. 300 species of butterflies photographed in Vietnam (all in the North).
300 species up... 400 here I come. Could take some time though!... unless I travel further south. 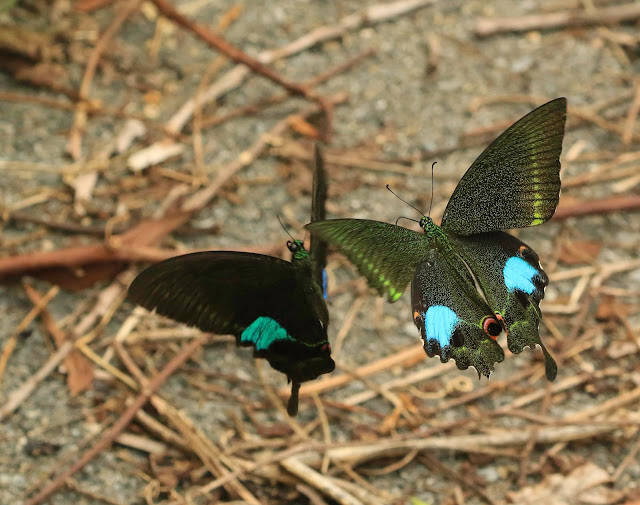 Papilio paris
A very common Papilio with broad habitat tolerance, but I never feel bored to shoot this species over and over 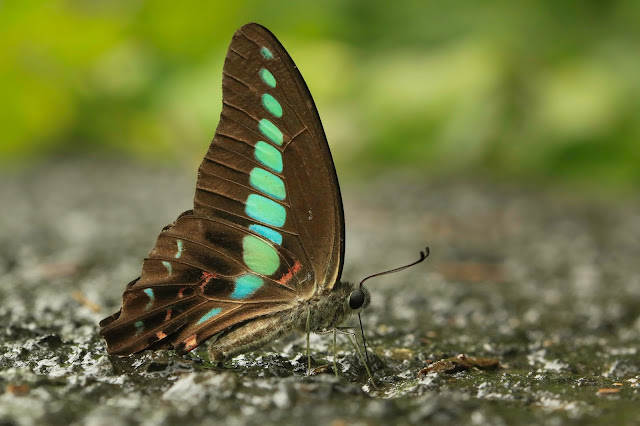 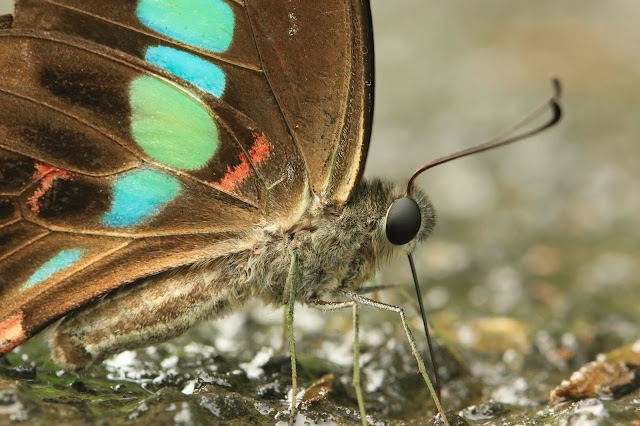 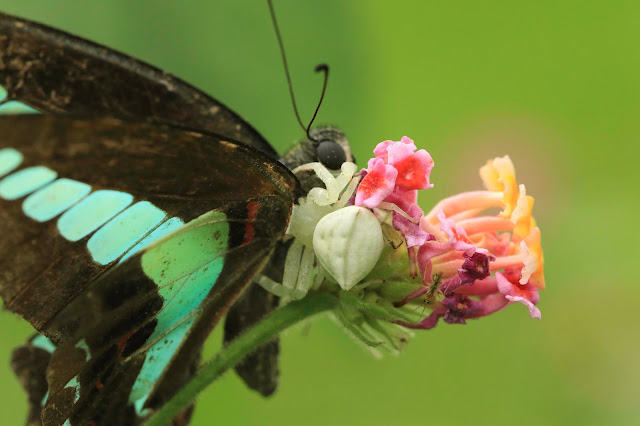 Graphium sarpedon caught by camouflaged Crab Spider (Thomisus sp., Thomisidae)
This spiders are formidable hunters as their camouflage helps them blend in perfectly and ambush preys much bigger than them. I left feeling sorry for the poor butterfly but its just part of nature 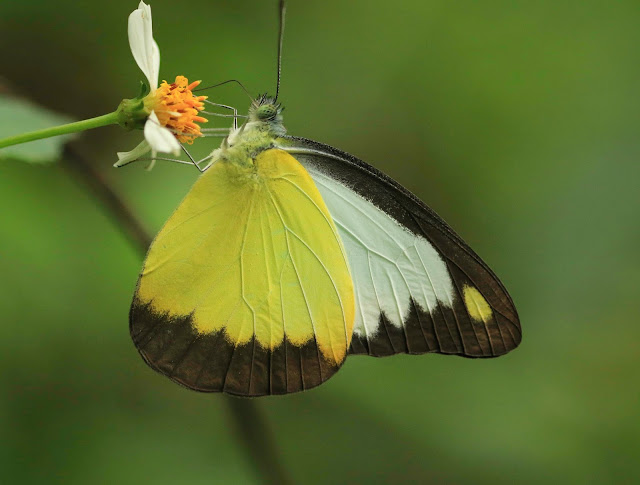 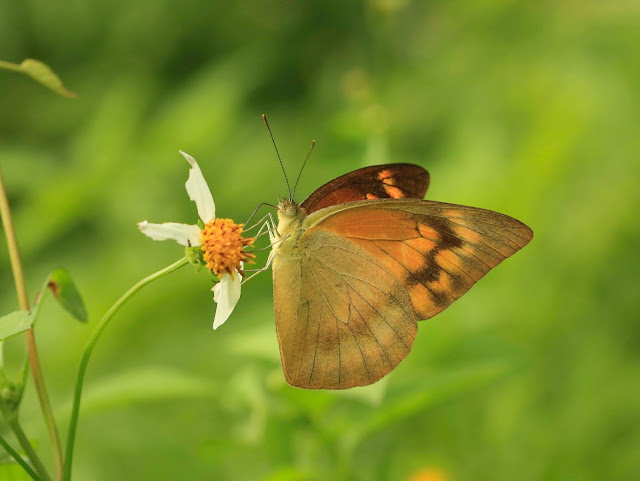 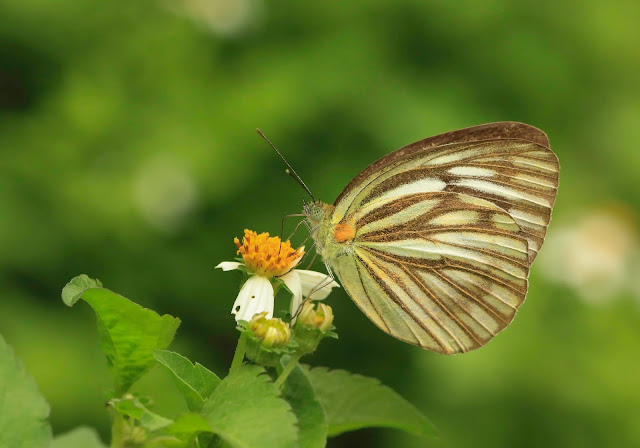 Cepora nerissa
Two species of  Cepora can be seen in N.Vietnam - nerissa and nadina, both very common. The third one present in Vietnam is iudith, but it is only recorded from the South of the country 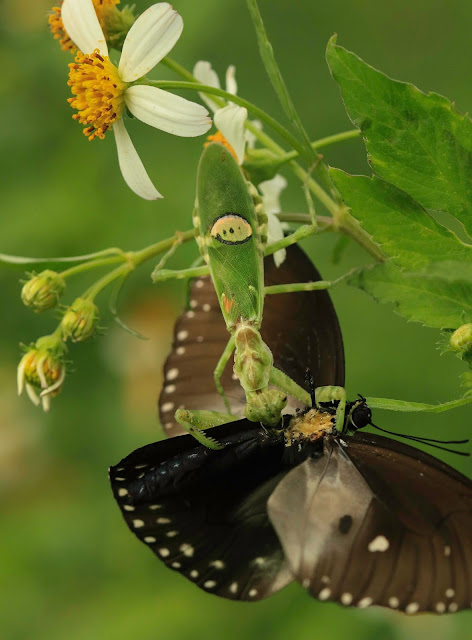 A Jeweled Flower Mantis (Creobroter sp., very likely the widespread C. gemmatus) dines on an Euploea sp.. Like the Crab Spider, this mantis is a flower-dwelling ambush predator 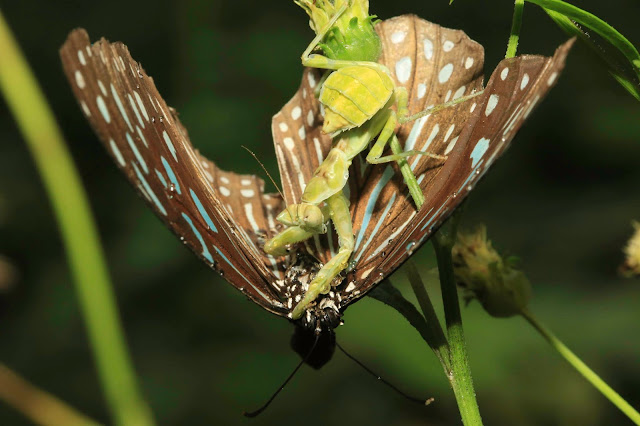 Here, the prey is Tirumala septentrionis 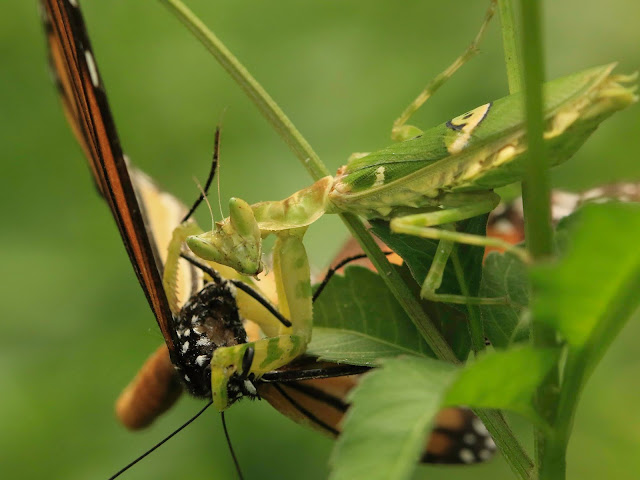 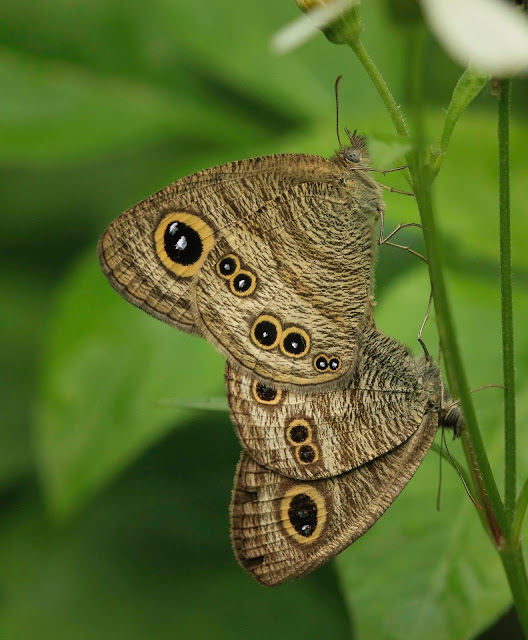 Ypthima baldus - mating pair
At least 5 species of Ypthima have been recorded at Cuc Phuong (baldus, singorensis, praenubila, huebneri, imitans). Positive identification of field photographed individuals is often a tricky business, because either the upperside or underside of an individual may not be available 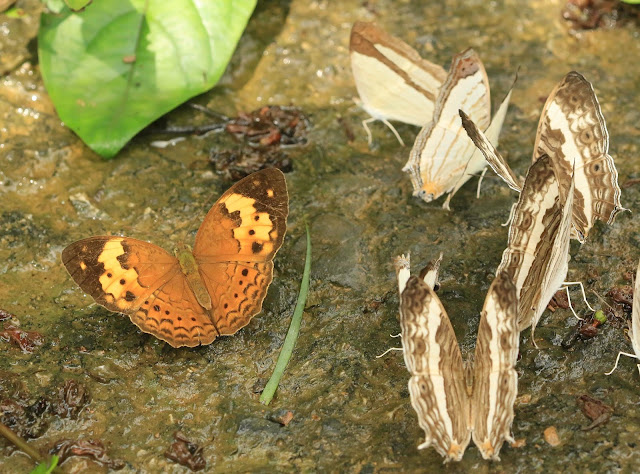 Cupha erymanthis mud-puddling with Cyretis cocles and C. themire
Cupha erymanthis is a very common species, but its active and skittish nature make it challenging to shoot at close range. Occasionally, however, when it's attracted to sweat and other food sources that it likes, the Rustic becomes more cooperative and allows the photographer to approach it 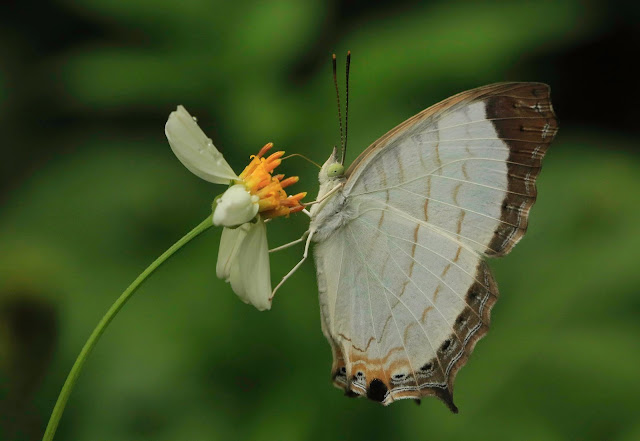 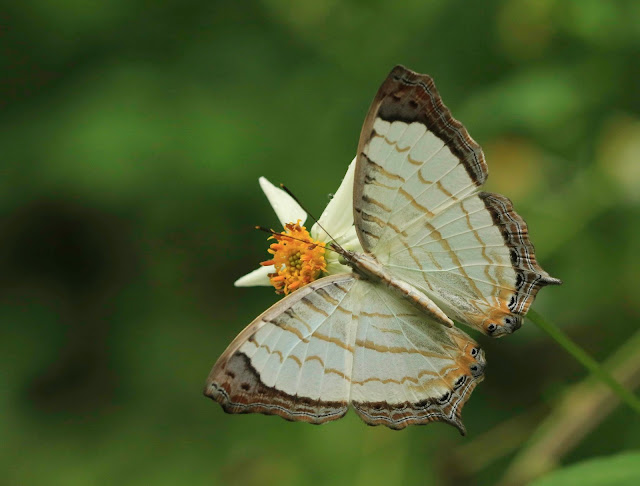 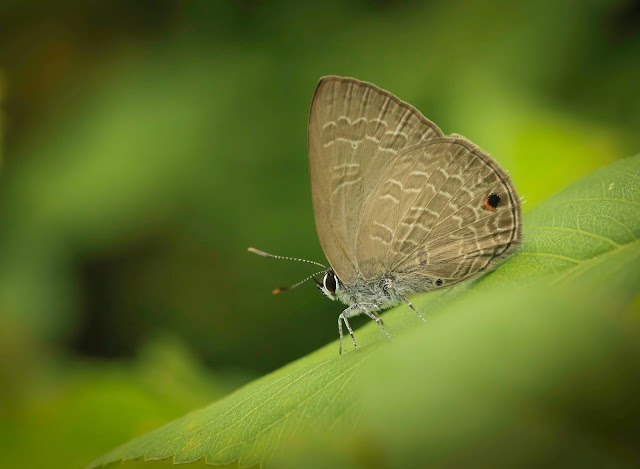 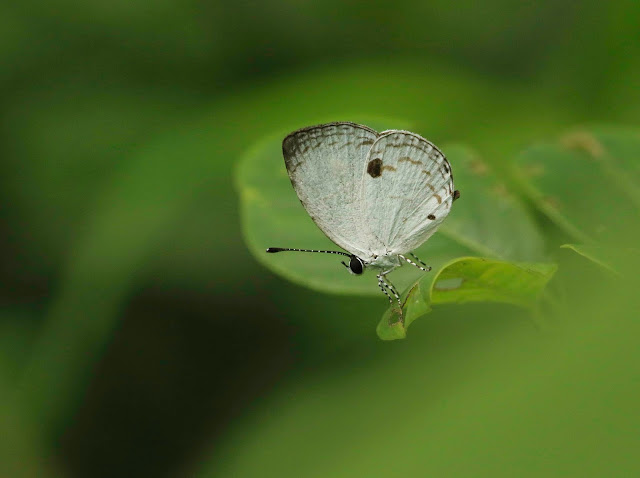 Neopithecops zalmora
This small species is not uncommon and is usually observed alongside shady trails. Its flight is typically feeble and erratic 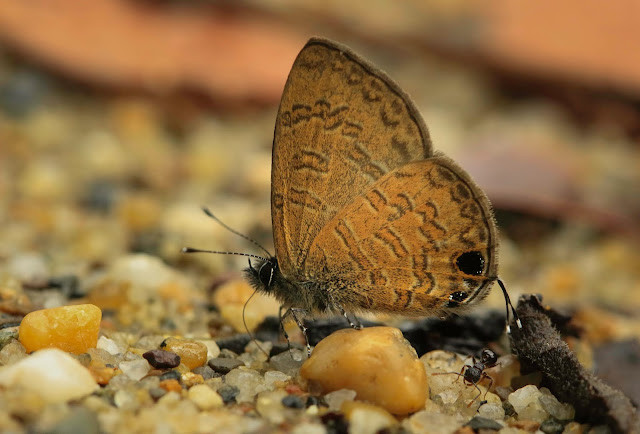 Prosotas nora
A common Lycaenid to be found along forested paths and roadsides where a big number of males can be found congregating at moist spots. According to Monastyrskii  & Devyatkin (2016), 7 Prosotas species are currently known in Vietnam: aluta, bhutea, gracilis, lutea, pia, nora & dubiosa - the 2 latter being the most widespread and also the only ones recorded in the north of the country

Ionolyce helicon
Note the straight termen of both wings and the pointed apex of the forewing - hence its English name, the "Pointed Lineblue" 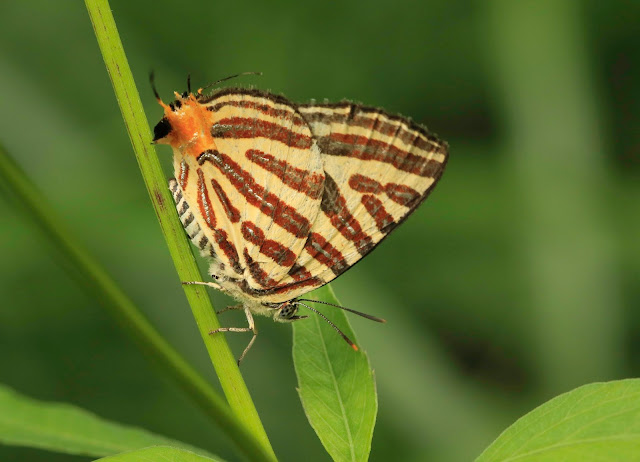 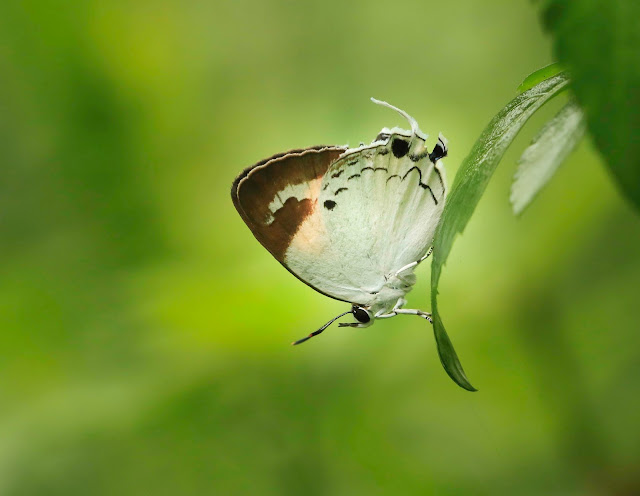 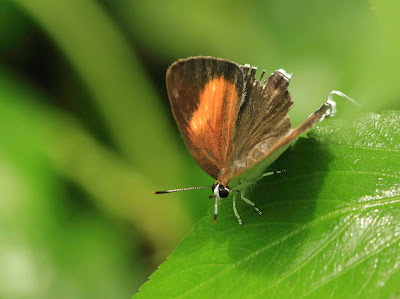 Suasa lisides - one of the highlights of this trip 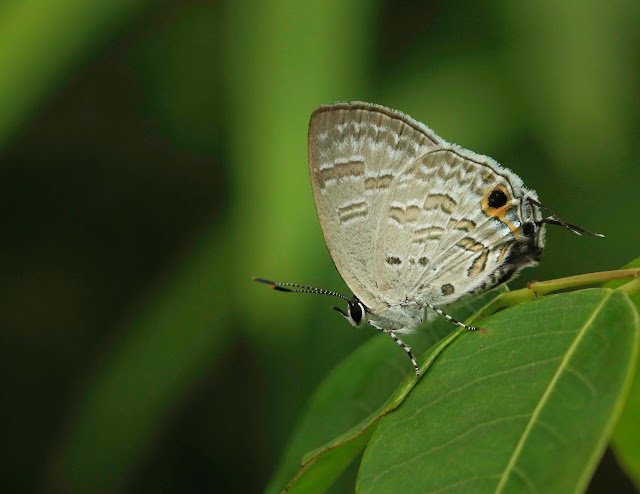 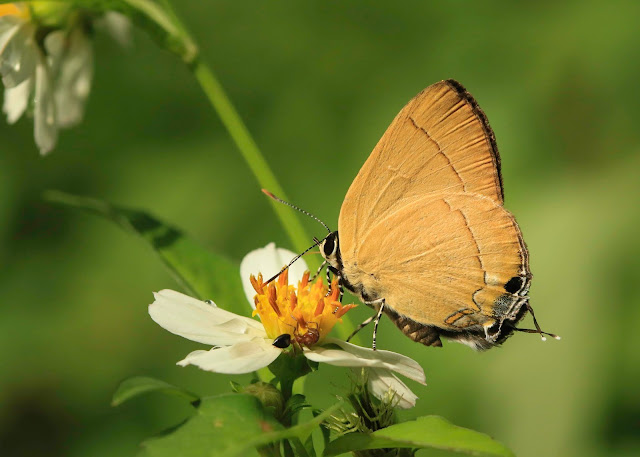 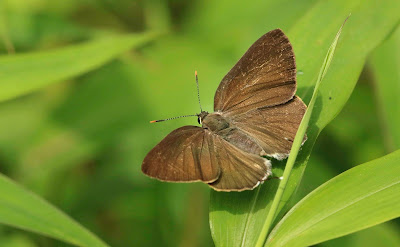 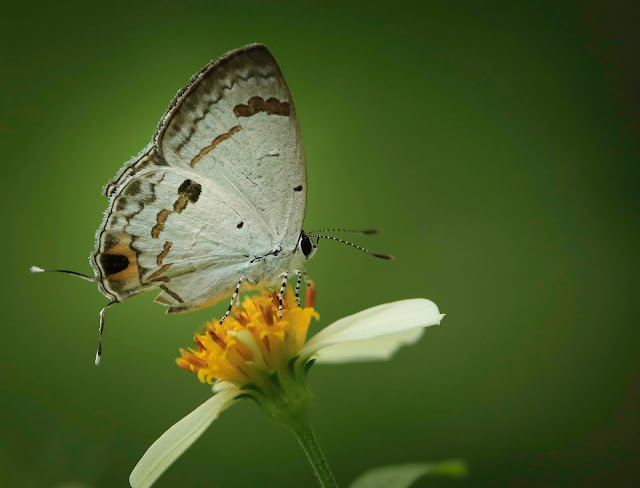 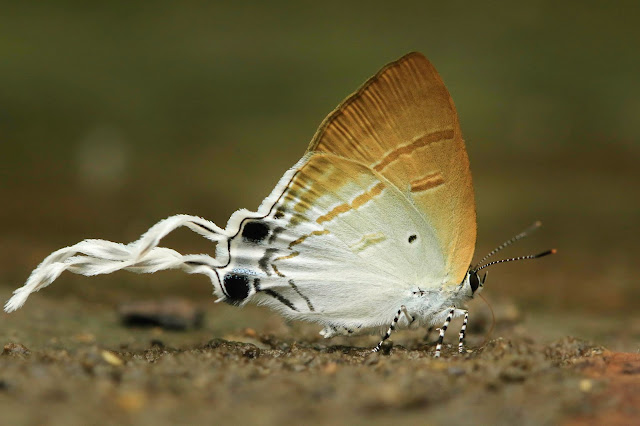 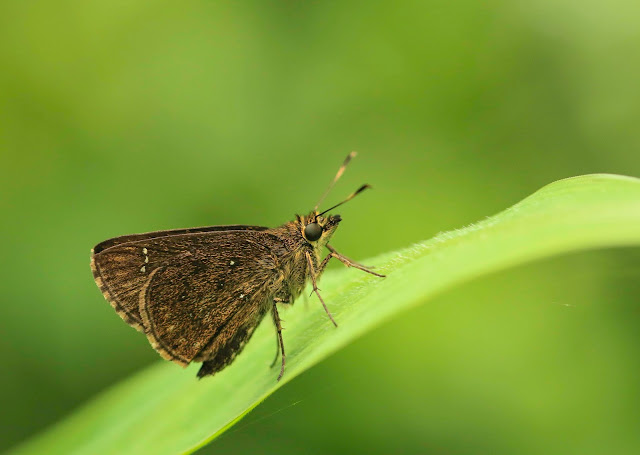 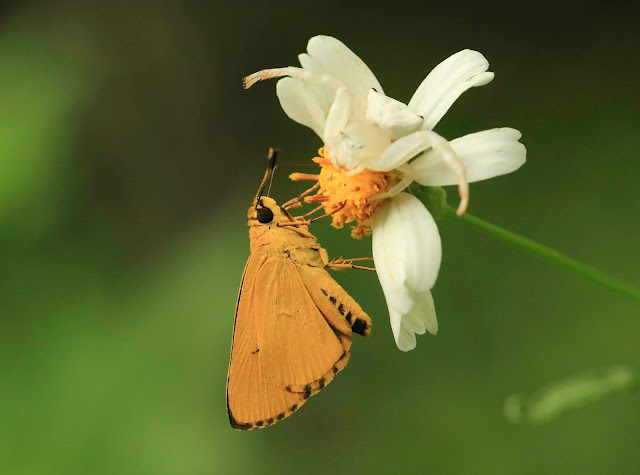 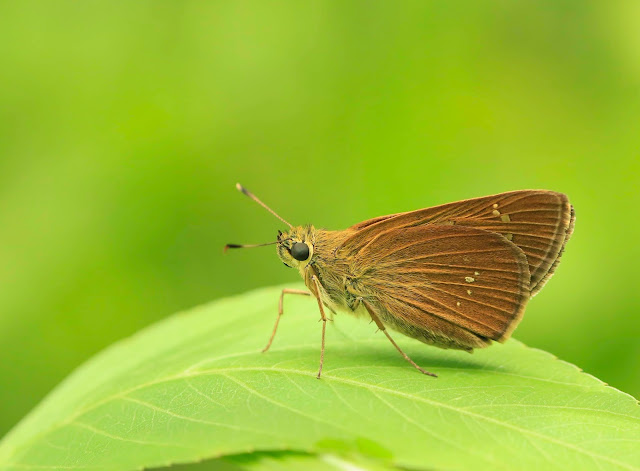 Polytremis lubricans
It has a characteristic rich ochreous brown underside colour. The number of HW spots visible varies greatly & may be almost absent 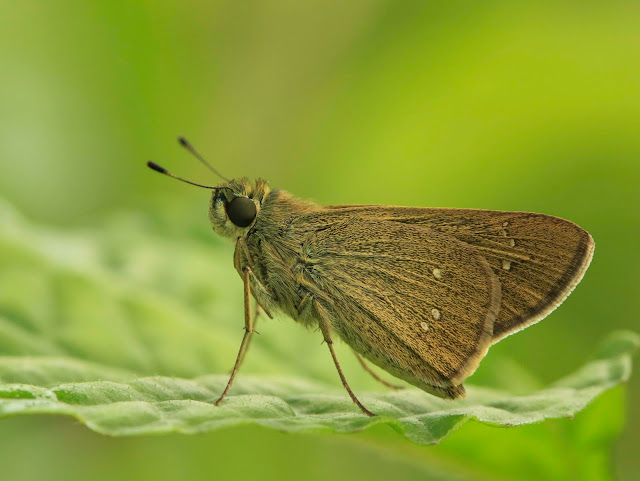 
I also found some new Orthoptera for my personal list, among them this stunning Aularches miliaris: 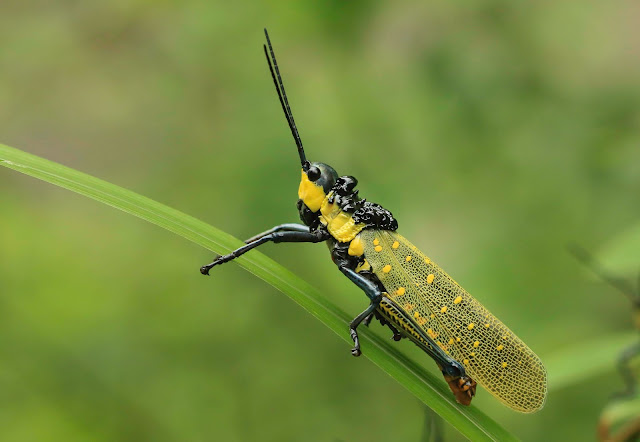 Posted by Sébastien Delonglée at 21:40 2 comments: