Euploea tulliolus is distributed widely from the eastern part of the Southeast Asian mainland and the Malay Peninsula through the Philippines to Papua New Guinea and the eastern coast of Australia.
Subspecies dehaani ranges through Indochina, S.China, Hainan.

This wide-ranging species can be seen in a large variety of forest habitats, at different elevations. 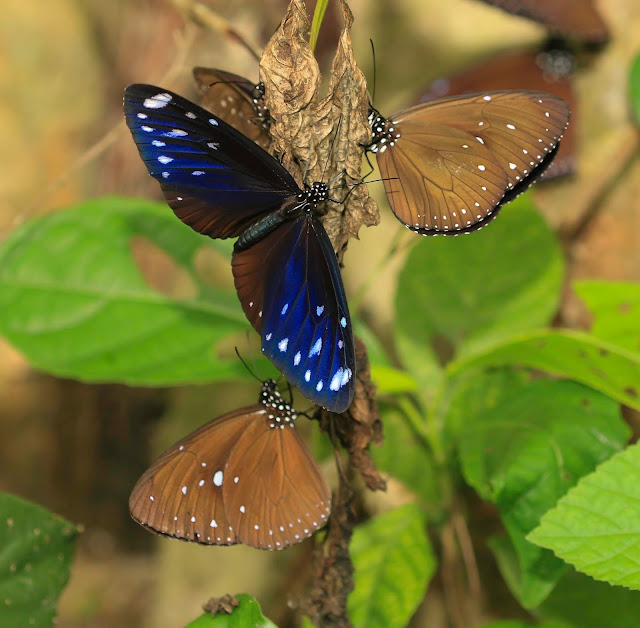 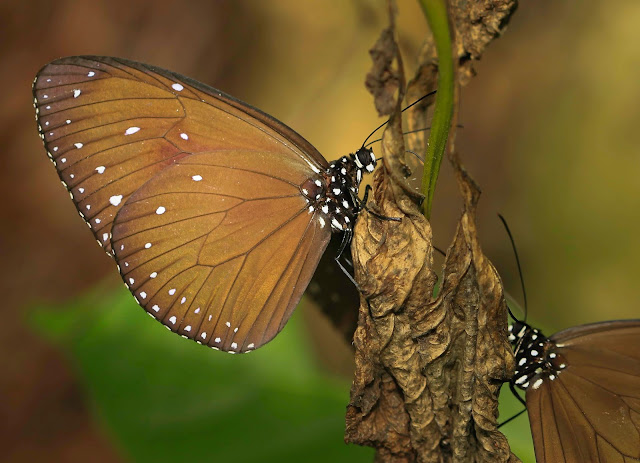 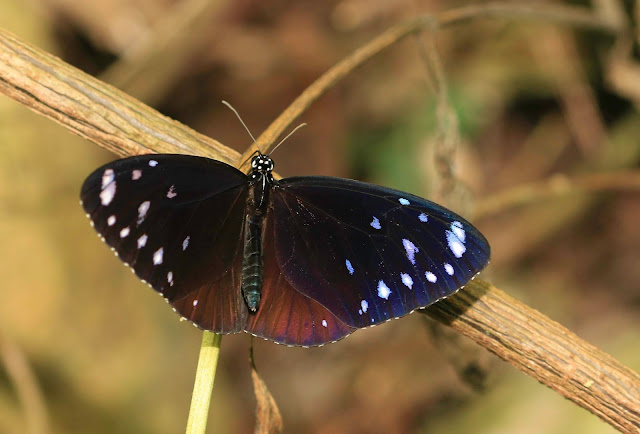 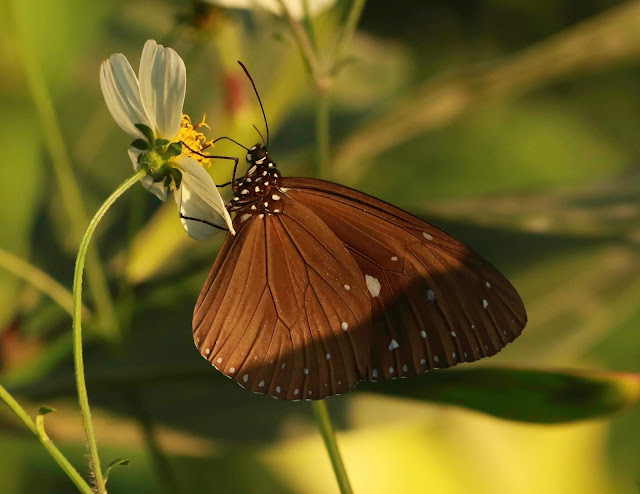 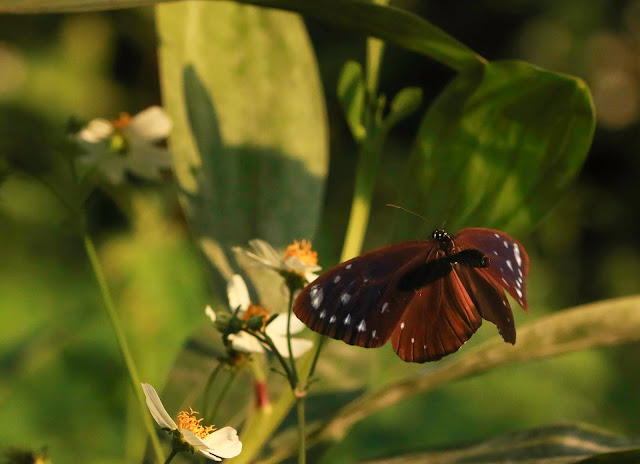 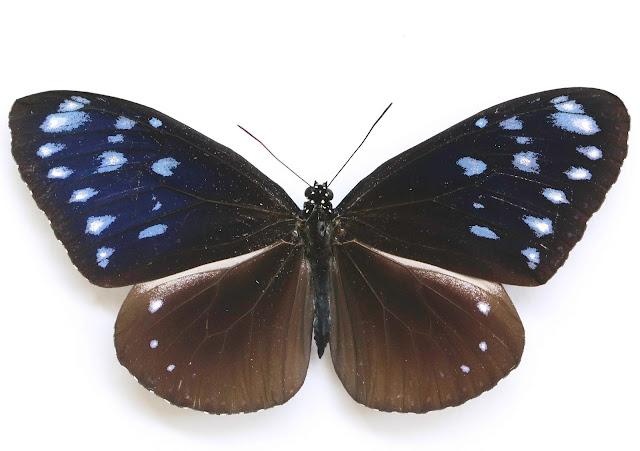 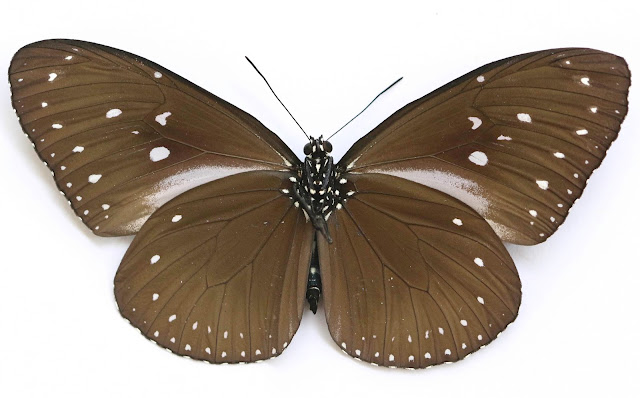 Underwings of Mycalesis inopia appears to be very similar to that of M. adamsonii. Both show a broad white postdiscal band suffused with violet on both wings bearing the same arrangement of ocelli. But according to me (to be confirmed), area from base to postdical band is blackish in inopia wheras it appears somewhat brown ochraceous in adamsonii.

Identification is easy with voucher specimens: M. inopia show black Up (brown in adamsonii) and the male lacks a brand on the UpF (brand overlaid by a hair tuft in space 1b in adamsonii). 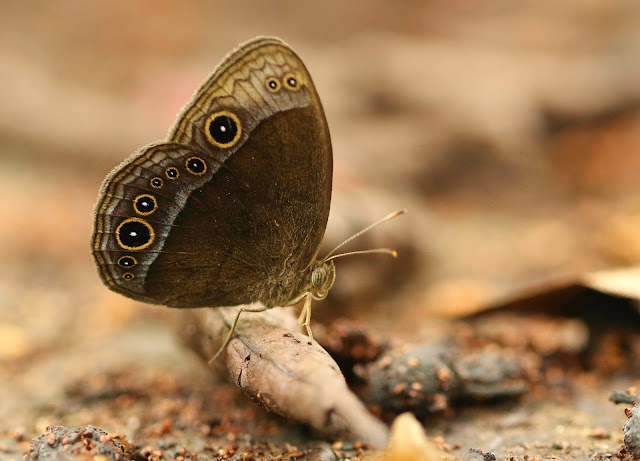 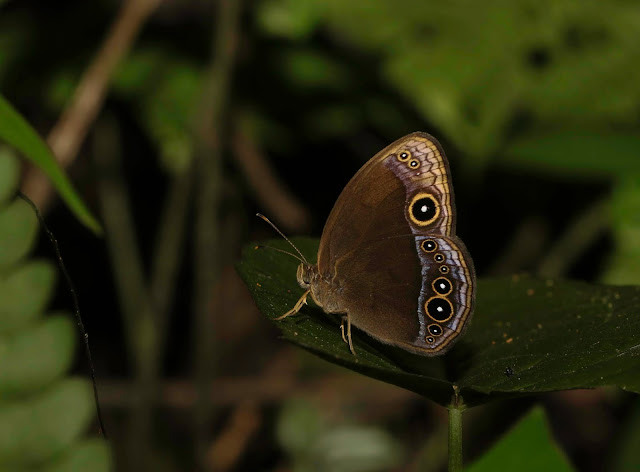 The genus Atrophaneura comprises around 50 species, of which 3 are currently known to occur in Vietnam - A. zaleucus zaleucus, A. varuna astorion & A. aidoneus aidoneus.
A. varuna and A. aidoneus show very similar color pattern. A. zaleucus (previously treated as subspecies of A. varuna) is unmistakable with its white patches on HW. 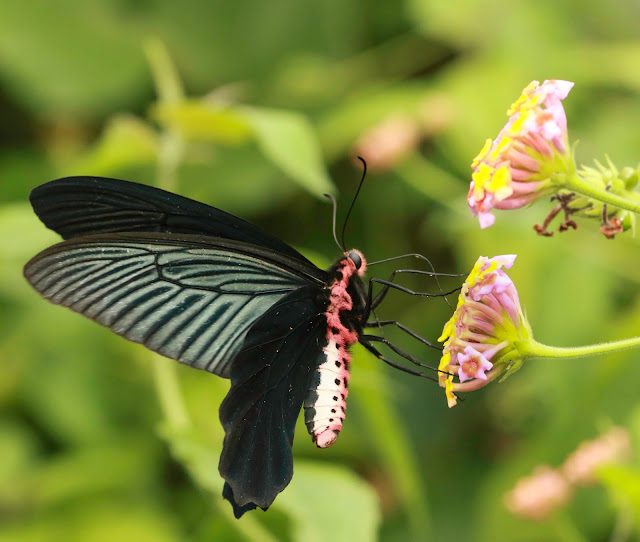 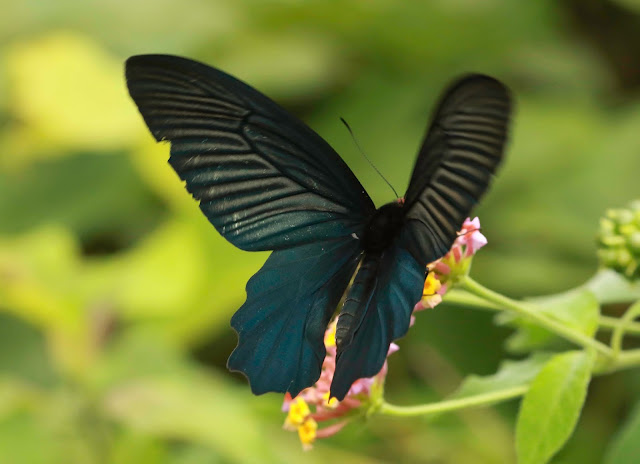 Same specimen than above
In both sexes of  A. aidoneus the upperside HW is uniformly coloured, where in all subspecies of A. varuna the cell is obviously darker than the rest of the hindwing (Cotton & Racheli, 2006)

Upperside of 2 specimens of A. varuna astorion for comparison (Huu Lien, October 2016)
Posted by Sébastien Delonglée at 18:53 No comments:


I found a specimen of this species in a very unexpected area, namely the Hanoi's Botanical gardens! Probably not migrant or vagrant but adventive specimen (i.e. did not come there with its own strength). Certainly be brought in a batch of forest plants.
Arhopala birmana birmana is recorded in Myanmar, N.Thailand, Laos, Vietnam (N. & C.), S.China. Subspecies asakurae occurs in Taiwan, subsp. hiurai in Palawan (Philippines). 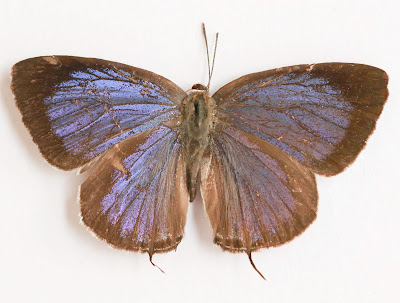 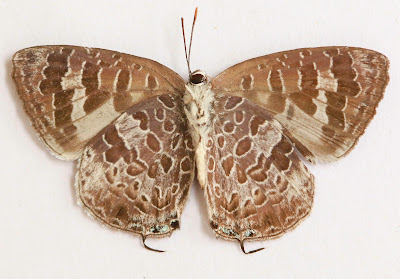 Posted by Sébastien Delonglée at 18:53 No comments:


The genus Curetis comprises of 18 known species variously distributed from India and Sri Lanka to China, Japan, the Philippines, Malaysia, Sumatra, Borneo, Sulawesi, Papua New Guinea and the Solomon Islands. These butterflies are known as "Sunbeams", due to the brilliant metallic coppery-red uppersides of the males, which glint in the sunshine. Females are earthy brown with large suffused white patches on the upperside, and can easily be mistaken in flight for small Pierids. The undersides of all species are silvery-white with small black dots. 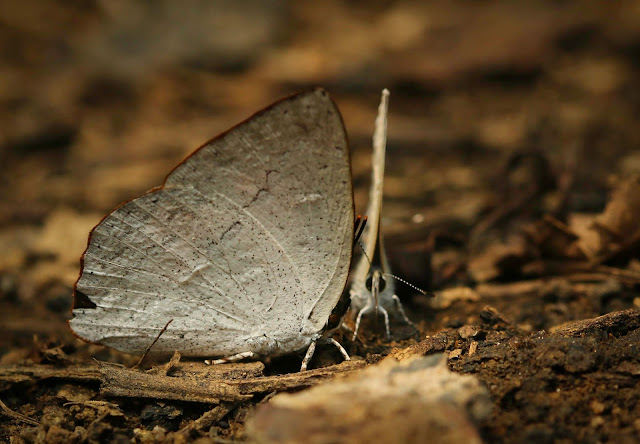 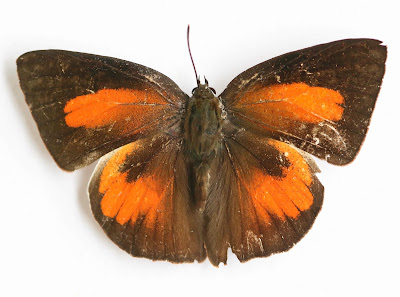 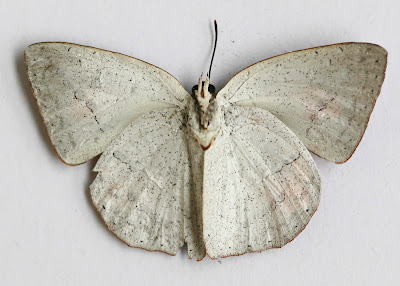 Posted by Sébastien Delonglée at 16:22 No comments: 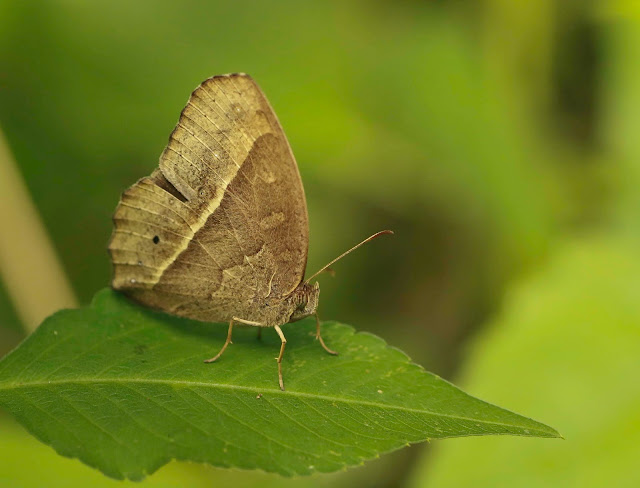 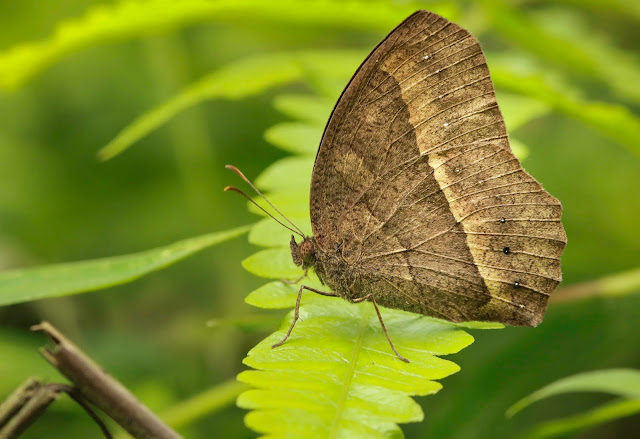 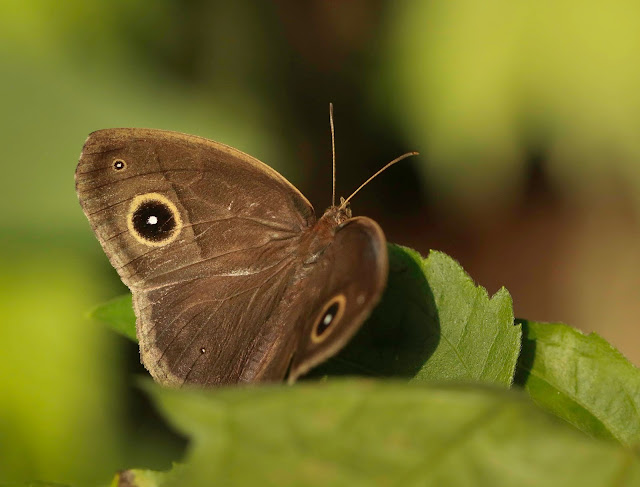 Posted by Sébastien Delonglée at 03:08 No comments:


This species was earlier considered to be part of the genus Mycalesis but phylogenetic studies have re-classified them in genus Heteropsis (Kodandaramaiah et al., 2010). 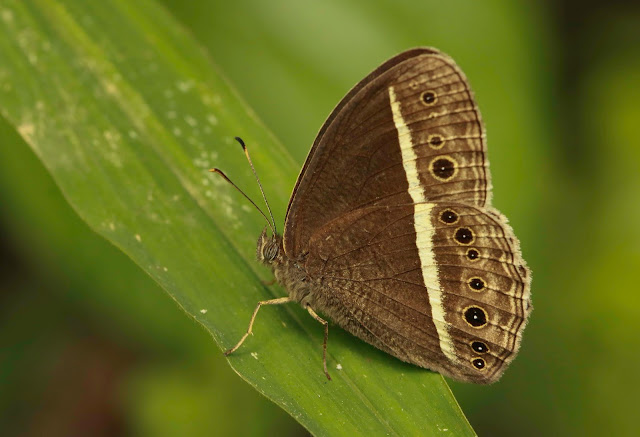 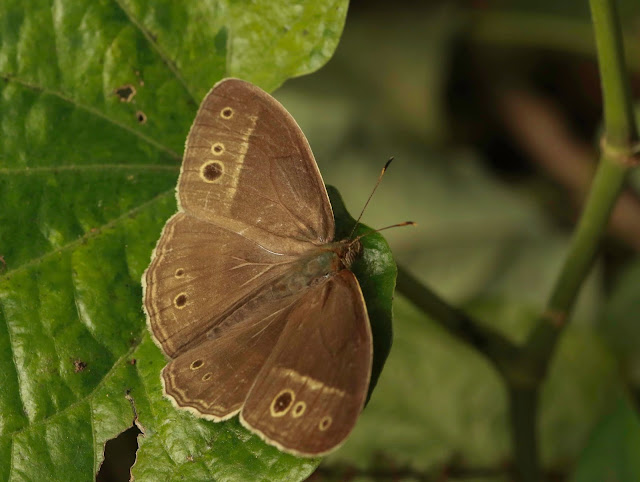 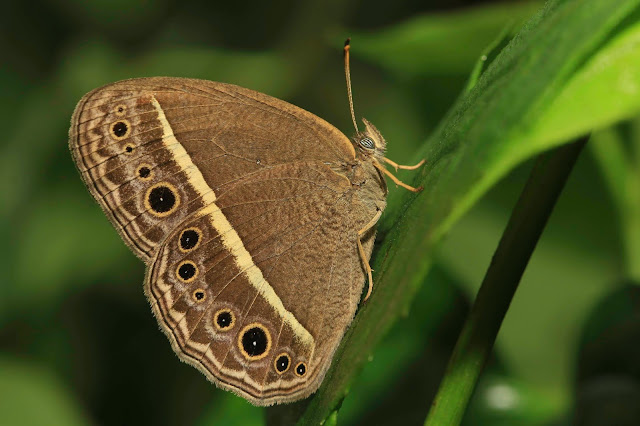 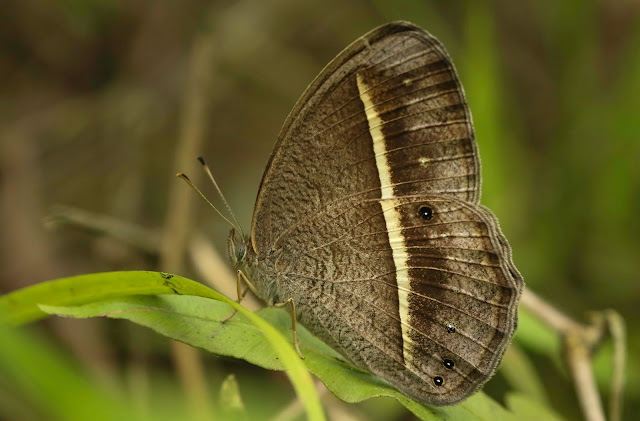 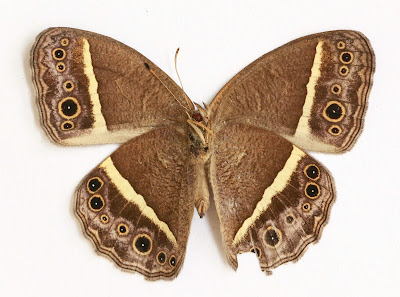 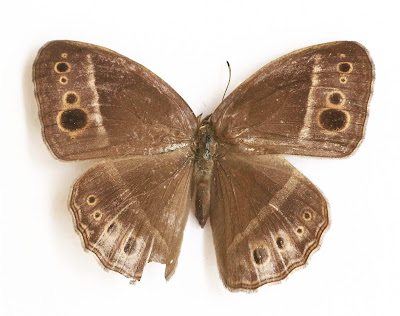 Same specimen, upperside
Posted by Sébastien Delonglée at 03:07 No comments: