The genus Hypolimnas comprises more than 30 species. It is represented in Vietnam by 2 species viz. bolina and misippus.

Hypolimnas misippus is a very widely distributed in  the tropics, native to Africa, Asia and Australia, and introduced to Caribbean islands and northern South America, and occasionally dispersing to the southern USA (Hoskins, 2012). The neotropical range may have been due to transport in slave trading ships (Butterflies and Moths of North America, 2016).

The female is one of the best examples of protective mimicry, resembling the unpalatable (to birds) Danaid Plain Tiger, Danaus chrysippus. The male however is quite different in appearance, being dark brown on the upperside, with circular white patches that reflect a deep purple sheen in bright sunlight. 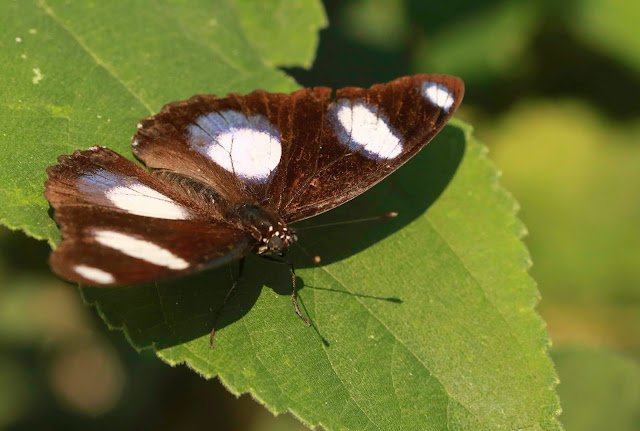 Hypolimnas misippus, male, Hanoi, November 2016
The male flies fast and somewhat erratically but settles frequently on bushes or small trees, to await passing females, ready to chase away any intruder. Like H. bolina, male H. misippus shows very strong territory habit. Whenever any butterfly fly into its territory, it chases away them aggressively, then returns back to the same spot 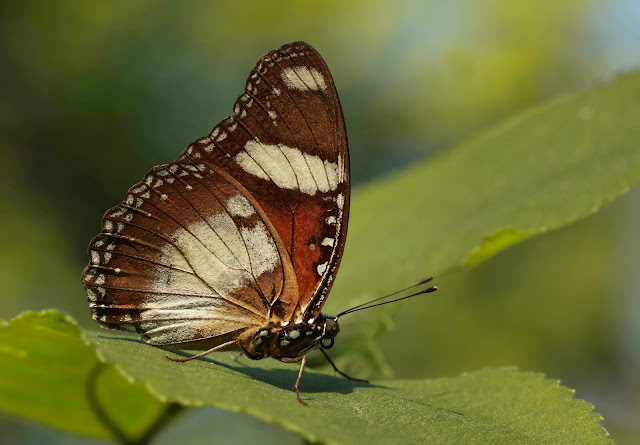 I have check out (with binoculars) many Danaus chrysippus in search of the female of H. misippus, but I have not been able to find a single one. She can be easily distinguished from its model by the HW without blackish spots around discal cell and scalloped marginal edge.
Posted by Sébastien Delonglée at 23:45