Only two species make up this genus, one restricted to a number of Pacific islands, the other very  widely distributed, from Pakistan to the Pacific islands and SE Australia.

Badamia exclamationis is readily distinguished from other awls by the elongate fore wing and shape of the hind wing which has a recurve along the margin near the tornus.

UpF dark brown with three pale yellow central spots. UpH with a dark-brown tornal patch and a pale yellow subtornal spot. Underside of both wings grey-brown. The large abdomen is characterized by black and yellow banding.

The range extends from India, China and the Philippines, through Indonesia to mainland New Guinea and adjacent islands, northern and eastern Australia, the Salomon Islands, New Caledonia and Fiji. Badamia exclamationis is known to migrate in vast flights. Locally the species can be so numerous that its food plants (Terminalia) are completely defoliated (Common and Waterhouse, 1981). 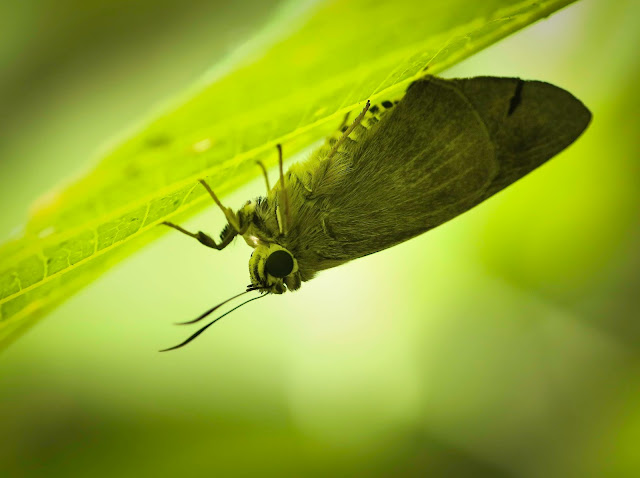 This crepuscular Hesperid flies actively early in the morning and late in the evening, whereas it usually pitches under a leaf and is loath to move during the daytime. Hopefully, one day, I will get a better shot.
Posted by Sébastien Delonglée at 04:52